Due to the travel ban, all pricing info on this site is NOT updated. Use them as reference only.
Call: 1300 308 081
Email: travel@firstclass.com.au 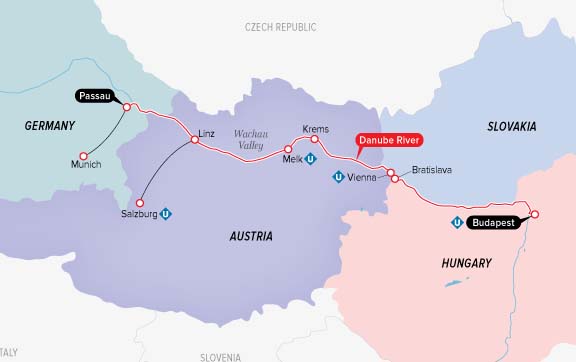 Celebrate the season in the birthplace of many beloved holiday traditions.

Budapest has celebrated Christmas for a thousand years, since the reign of St. Stephen, the king who founded Hungary and encouraged the spread of Christianity throughout his realm. As you ramble through the Christmas Market on Vörösmarty Square, admiring the handmade porcelain, stop to watch as kürtos kalács (a pastry) is baked on rods over an open fire and then coated with sugar before it’s handed to you.

In Bratislava, where a lively young art scene is revitalizing the compact city core, stalls abound with traditional Slovakian Christmas items such as medovníky (spiced ginger cookies) and šúpolie (figurines made from corn husks). Experience Uniworld’s exclusive “Taste of Christmas" program in the heart of Vienna during the day.

Glorious baroque architecture, delightful concerts and ravishing scenery will make this Christmas season unforgettable as you sail through the holidays on the Danube.

* All prices quoted are PER PERSON based on twin share in Australian Dollars and include taxes, fees and port expenses (if applicable). All prices quoted are for the cruise departing on 16Dec20. Certain departure dates and embarkation points may be at an additional supplement. For more information please contact one of our Travel Specialists.

Uniworld is proud to be a part of The Travel Corporation’s family of brands, which is why they are thrilled to announce the 100th Anniversary Celebration Event! Join Uniworld in celebrating TTC’s 100 years of excellence in hospitality in 2020 with savings of up to 20% on select 2020 voyages.

Celebrate with the most all-inclusive amenities finely tailored to your tastes.

SAVE 5% on all Suite category staterooms or
SAVE 10% on all other stateroom categories.
Book by 30 June 2020 and pay in full at time of booking to be eligible for this offer.

*Rates are based on per person for two adults sharing. For solo travellers or single person occupancy rates, or other cabin types not listed, please contact our Travel Specialists for a quote. 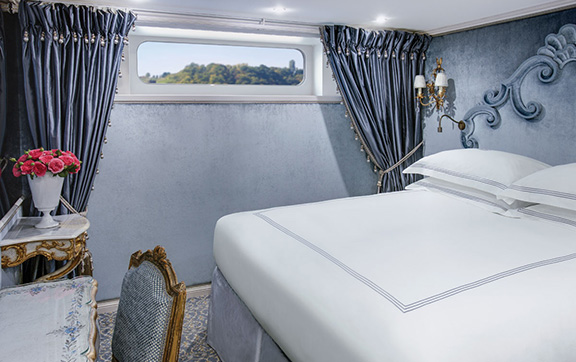 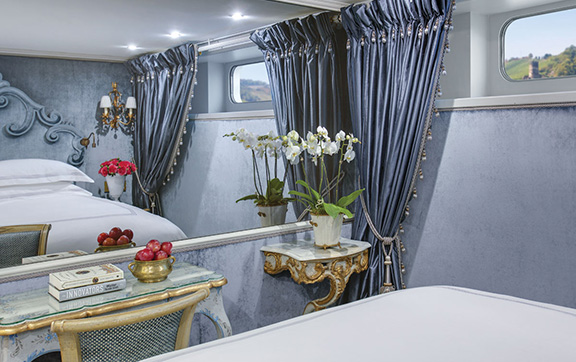 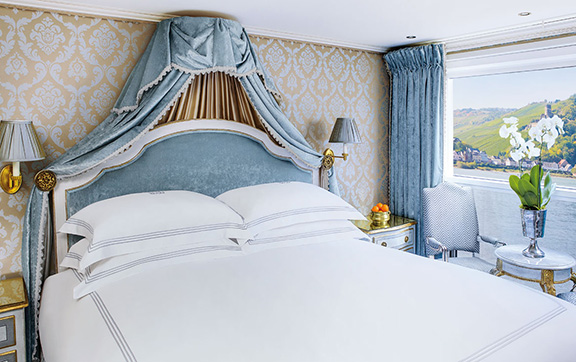 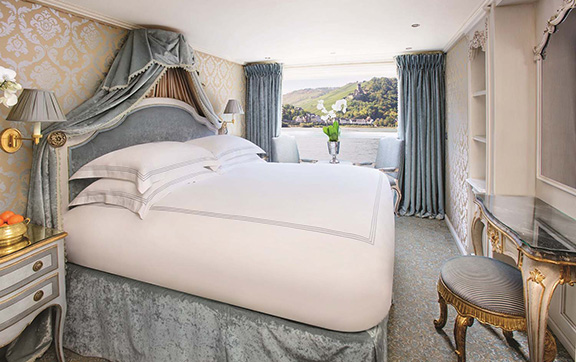 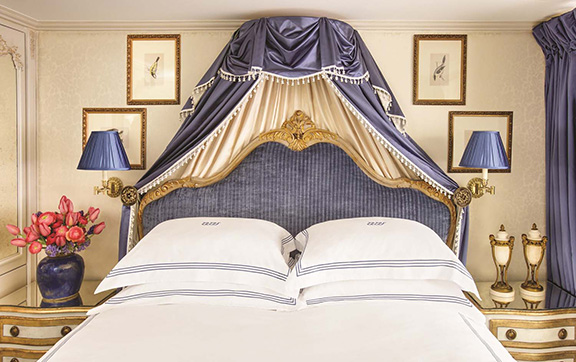 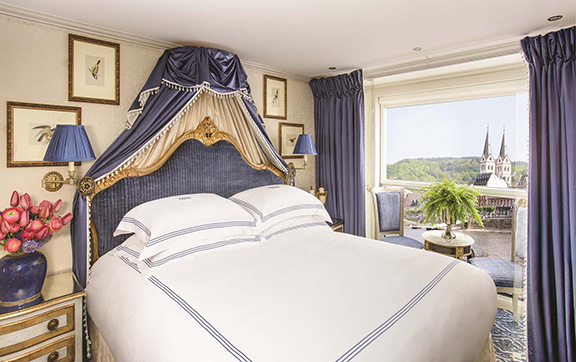 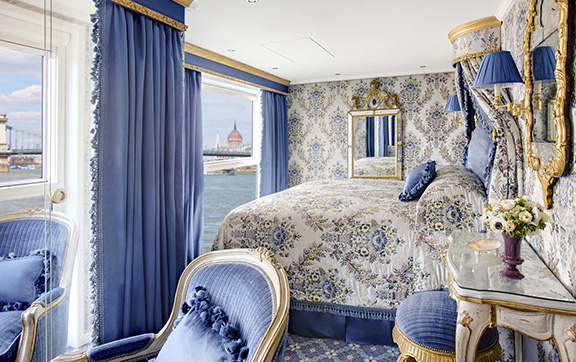 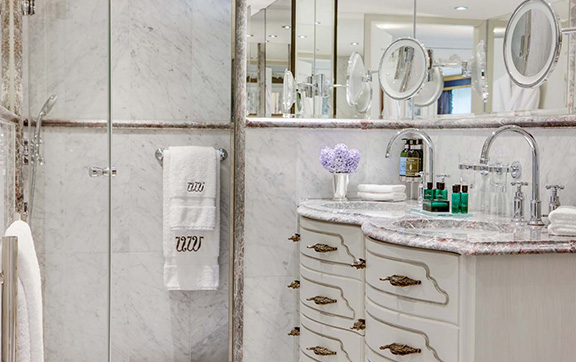 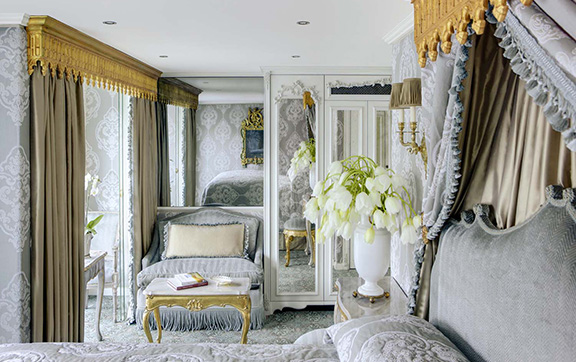 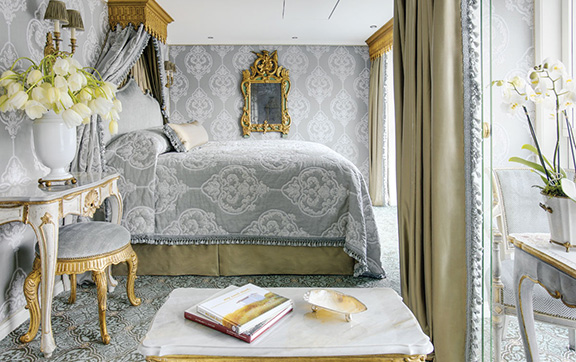 The Royal Suite offers extra benefits, including a separate spacious living room, bathroom with a separate rain shower and tub, and secluded toilet and bidet area 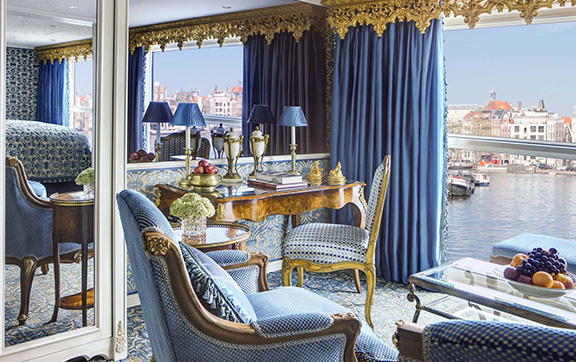 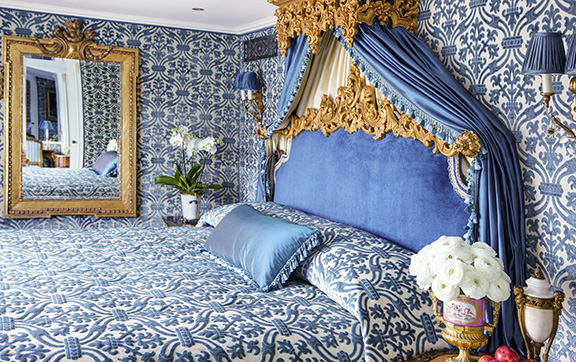 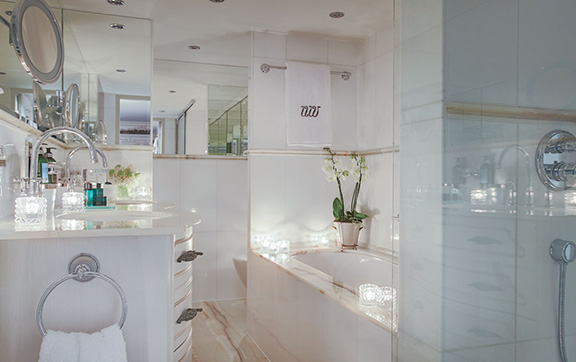 Arrive at the Budapest Ferenc Liszt International Airport. If your cruise package includes a group arrival transfer, or if you have purchased a private arrival transfer, you will be greeted by a Uniworld representative and transferred to the ship.

Located on opposite sides of the Danube, Buda and Pest each has a distinctive character and allure all its own. You’ll get a taste of this dynamic capital city with your choice of tours, and visit Budapest’s celebrated Christmas market—one of the largest in Europe. Christmas has been celebrated in Budapest for a thousand years, since the time of St. Stephen, the king who founded the nation of Hungary and encouraged the spread of Christianity throughout his realm, but the city began as a Roman encampment almost a millennium before that. Over the centuries it’s been controlled by Germans, Austrians, Ottomans and Communists, all of whom have left traces. Today you’ll have a chance to experience some of the holiday traditions of this beautiful city.

A special Captain’s Welcome Reception and Dinner will be prepared for you this evening.

Once hidden from the world behind the “Iron Curtain,” Slovakia retains an air of mystery and intrigue, and its small capital city has an unexpectedly colorful history. You’ll learn more about Bratislava’s past from a local expert and also visit the local Christmas market—a relatively new (and thoroughly delightful) tradition for Slovakians. How do you say “Merry Christmas” in Slovakian? “Veselé Vanoce!” Today you’ll arrive in the capital city of Slovakia, Bratislava. The heart and soul of Slovakia, Bratislava is full of surprises. The city straddles the mighty Danube and has played a leading role in the politics and culture of the region for many centuries. Following Ottoman incursions into Hungary in the 16th-century, Bratislava, then known as Pressburg, became the capital of Hungary in 1536 and retained that status under the Habsburgs well into the 19th-century. As a result of its longtime imperial prominence, the city is a melting pot of cultures and architectural styles, including Gothic, baroque and art deco. Unlike cities with venerable Christmas markets, Bratislava just established its first holiday market in 1993. But the Slovakians have quickly embraced the seasonal traditions of their Austrian and Hungarian neighbors— and you’ll get to embrace them as well.

Renowned for its art and architecture, its classical music, its decadent pastries and its lengthy list of famous former residents, the refined city of Vienna is a cultural treasure trove. Experience the city with your choice of tours, as well as something extra special—VIP access to an extraordinary collection of art. To see such masterpieces in complete privacy is an experience reserved solely for Uniworld guests. Tonight, enjoy a concert of Mozart and Strauss at a Viennese palace. The grand dame of the Danube, Vienna was the heart of the Austro-Hungarian Empire and remains, to this day, the political and cultural center of Austria. Klimt painted here; Beethoven and Mozart composed here; Freud developed his theories here. It’s a treasure trove of splendid architecture, astonishing art collections and inviting cafés—and it’s yours to enjoy.

Featured Excursion:
Exclusive “Morning with the Masters” at the Vienna Art History Museum

One of the most beautiful abbeys in Austria is still an active Benedictine monastery, but a monastery the likes of which you’ve never seen—Napoleon himself once laid his head here in the lavish imperial quarters. With its 14th-century stained glass windows, the abbey’s jewel box of a church is the perfect setting for a soul-stirring concert of organ music. Back onboard, enjoy a scenic cruise through the UNESCO-protected Wachau Valley. The fairytale town of Krems, about 40 miles (70 kilometers) west of Vienna, is your first port of call in the astonishingly beautiful Wachau Valley. Both the millennium-old town and the valley itself have been designated UNESCO World Heritage sites; today you’ll have a chance to see why.

You’ll want to find a comfortable seat in the lounge or on the Sun Deck today as your ship cruises through the Wachau Valley. Over the eons, the Danube cut a gorge through the foothills of the Bohemian Mountains, resulting in a 19-mile (30-kilometer) stretch of riverine scenery so beautiful; UNESCO declared it a World Heritage Landscape. Castle ruins dominate hilltops; baroque church towers appear on the riverbanks, marking historic villages and splendid abbeys; and vineyards and apricot orchards cling to the rocky slopes. Some of Austria’s finest white wines are produced from grapes grown on the dry-stone terraces above the river, where grapes were first planted 2,000 years ago.

Mozart’s birthplace of Salzburg is nestled in a glorious alpine setting that sparkles like a winter wonderland this time of year. Fans of The Sound of Music may recognize locations from the Oscar-winning film in the city’s Old Town, the site of a grand cathedral and an absolutely enchanting Christmas market. Your ship docks in Linz today. From there, you’ll travel to the elegant alpine city of Salzburg for an enchanting full-day excursion.

Passau is a crossroads in more ways than one—three rivers meet here and three nations nearly do, making for a fascinating cultural mosaic. Get to know the town with a guided stroll, then visit the local Christmas market on the square in front of the cathedral. Later, enjoy a traditional holiday celebration in a festively decorated barn.

A special Captain’s Farewell Reception and Dinner will be prepared for you this evening.

One of Europe’s most beloved and longest reigning monarchs, the great Habsburg ruler Maria Theresa, was so extraordinary that we built an entire Super Ship in her honor. Named “Best New River Ship" by Cruise Critic editors her maiden season, the S.S. Maria Theresa features ultra-luxurious accommodations and an array of thoughtful personal touches, ensuring a truly indulgent and unforgettable voyage along the Rhine and Danube Rivers.

The S.S. Maria Theresa has a Royal (Grand) Suite, 10 Suites and 64 staterooms, all with made-to-order Savoir of England beds, high-thread count 100% Egyptian cotton sheets and European duvets, a menu of pillow options and marble-lined bathrooms stocked with Asprey and Hermès bath and body products.

Whether you’ve visited Europe once or a dozen times, you haven’t really experienced the best of Europe until you’ve sailed with Uniworld Boutique River Cruises. Uniworld has been cruising the waterways of the world for more than 30 years. Their river cruise combines the charms and landmarks of different destinations with exquisite accommodation, award-winning hospitality, and world-class cuisine of a five-star boutique hotel. Cruise the historic waterways of Europe, Russia, Egypt, China and Vietnam & Cambodia.

Uniworld offers the highest level of comfort, quality and service in river cruising with an unparalleled variety of vacation choices. You’ll cherish this world of benefits designed just for you.

Book your river cruise with Uniworld and save 10% on select 2023 cruises when you pay in full within 3 days of booking!*